Juana Jackson June 16, 2022 Milan travel Comments Off on Israeli ‘road charging’ start-up is well on its way to a project at Bergamo Airport in Milan 27 Views

Israeli company Electreon, whose technology is embedded in roads to allow electric vehicles to recharge their batteries while traveling, is on track to design a lane for shuttles and service vehicles at Bergamo Airport in Milan, the company said in a statement.

The project was wrapped up Friday at an event to officially launch a one-kilometer (0.62-mile) charging circuit that Electreon has been testing in Brescia, northern Italy, since November 2020.

The launch brought together Italian ministers and senior executives from vehicle, infrastructure and technology companies.

Staff at Bergamo Airport in Milan are due to test their vehicles on the prototype road, Arena of the Future, and if all goes to plan the airport will move towards a commercial deal with Electreon to create an electric lane on the airport tarmac.

According to a press release from Electreon, luxury car company Maserati also said it wants to test its electric vehicles at the Arena, with a view to acquiring the technology at its factories.

The road prototype was built following the signing in October 2020 of a memorandum of understanding between Electreon and the Italian toll road infrastructure company, Societa’ di Progetto Brebemi SpA. The purpose of the MoU is to integrate the company’s wireless electric road system into infrastructure projects in Italy.

Cutting the ribbon to officially open the Arena of the Future, a demonstration electric charging road created in Brescia, northern Italy, by Israeli start-up Electreon. (Electreon)

At Friday’s event, Francesco Bettoni, president of the A35 toll motorway, known as BreBeMi, outlined the company’s vision to integrate Electreon’s technology into a stretch of road from Bergamo to Torino.

Solar fields are to be built along the road to power the system in a renewable way.

“Europe has clearly stated its objectives for the transition to sustainable transport. We are ready for the commercial phase of Arena of the Future technology,” Bettoni said.

He added: “I am happy to say that there is great interest in the technology and we are receiving inquiries from many local authorities interested in integrating the technology into intercity roads.

Aiming to reduce air pollution, the electric route removes the need for charging stations. According to the Electreon website, a system of copper coils are laid under the asphalt to transfer energy from the electrical grid to the road and to manage communication with approaching vehicles. Receivers are installed on the floor of vehicles to transmit power directly to the engine and battery while the vehicles are in motion. Communication with all management units and registered vehicles is done via cloud technology.

The system enables smaller batteries on electric buses, freeing up more room for passengers, uses existing roads and saves time as vehicles do not have to stop to recharge or refuel. 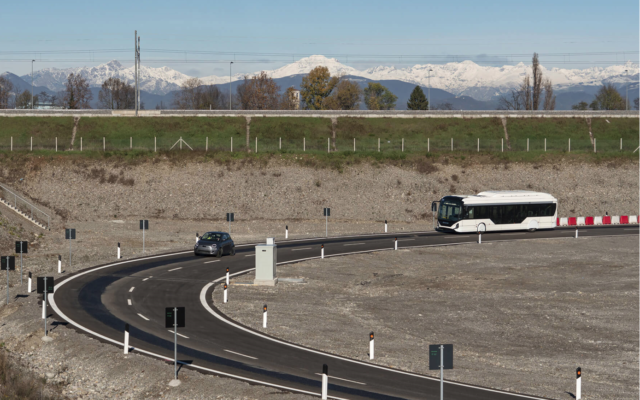 An electric bus and an electric Fiat 500 test the circuit of Arena of the Future, a demonstration electric charging route created in Brescia, northern Italy, by Israeli start-up Electreon. (Electreon)

At Friday’s event, a Fiat 500 electric car traveling at a speed of 84 kilometers (52 miles) per hour around the track started with a 22% charged battery and finished with a 48% charge.

An IVECO bus traveling up to 60 kilometers (37 miles) per hour also ended up with an increased load.

Electreon has many projects across Europe and in the United States.

In Israel, it is partnering with the city of Tel Aviv-Jaffa and the Dan Bus Company on a large-scale commercial deployment of its wireless charging infrastructure to power electric buses.

Supporting The Times of Israel is not a transaction for an online service, like subscribing to Netflix. The ToI Community is for people like you who care about a common good: to ensure that balanced and responsible coverage of Israel continues to be freely available to millions of people around the world.

Of course, we’ll remove all ads from your page and you’ll have access to great community-only content. But your support gives you something deeper than that: the pride of joining something that really matters.

Join the Times of Israel community Join our community Already a member? Log in to stop seeing this

You are a dedicated reader

We’re really glad you read X Articles from The Times of Israel over the past month.

That’s why we started The Times of Israel ten years ago – to provide discerning readers like you with must-read coverage of Israel and the Jewish world.

So now we have a request. Unlike other media, we don’t have a paywall in place. But since the journalism we do is expensive, we invite readers to whom The Times of Israel has become important to help support our work by joining The Times of Israel community.

For just $6 a month, you can help support our quality journalism while benefiting from The Times of Israel WITHOUT ADVERTISINGas well as access Exclusive content only available to members of the Times of Israel community.

Thanks,
David Horovitz, founding editor of The Times of Israel

Previous Why should you rent a travel coach
Next Your Friday briefing: EU leaders visit Ukraine